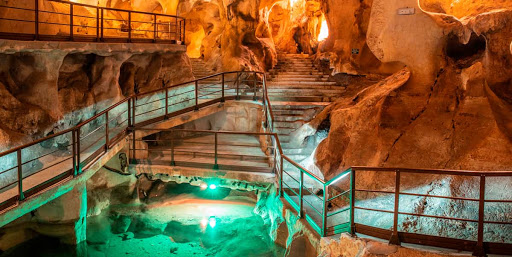 Stalactites, impressive galleries or cave paintings await these enclaves, sometimes hidden, which are an important part of the geological and historical heritage of Malaga.

Here are some of the best known cavities in the country, such as those of La Pileta or Nerja , but they are not the only ones.

Located in the area known as El Cantal, this cave, inhabited by prehistoric man, is a gem of geology, as it is considered the only cavity of marine origin in Europe.

In fact, the action of the Mediterranean has been the one that has contributed for millennia -from the Jurassic-, with its erosive effect, to the formation of both this cave and others located under the so-called Cantal.

Inside, numerous human, animal and ceramic remains from the period known as the 'Neolithic Cave' were found through different excavations.

Among its most important rooms, the Virgin, Volcano, Marco Craso and Noctiluca stand out. The latter owes its name to the discovery of a temple dedicated to the Phoenician goddess of the same name. In the most steep and eastern coast of the city of Malaga, prehistoric remains have also been found in different caves and shelters in the area of La Araña, almost on the border with Rincon de la Victoria. It is a karst area where pieces from the Neanderthal to the Neolithic and Chalcolithic have been found in several excavations.

For its scientific value, this area should become an important archaeological park. Specifically, it has an interpretation center and seven sites that are essential to know Prehistory in the area. Of all its caves, the most important is the Smoke Cave.

Currently, guided tours of this archaeological park can be made through the archaeological association 'Yacimiento de la Araña'. Other groups, such as ArqueoRutas, also organize there educational workshops designed for children.

This cave, which is the most visited in Andalusia, is currently one of the main tourist attractions in the province of Malaga.

It is located next to the village of Maro, and was discovered by chance by a group of young people in 1959.

Since then, progress has been made both in its research and in adapting different passages for visitors who wish to know it. It has 4,823 meters of travel, which places it among the most topographic development in the country.

The galleries open to the public have an area of more than 9,000 square meters, which represents approximately one third of the total cave.

In addition to its most spectacular geological formations - stalactites and stalagmites -, this cave is a key piece for knowledge about Prehistory, since there have been dated organic remains associated with some paintings in 42,000 years. Thus, it could be one of the first known works of art of Humanity. This cave, located in the municipality of Benaoján, treasures extraordinary cave paintings of the Upper Paleolithic. The cavity, which is currently privately owned, was discovered in 1905 by a village farmer, José Bullón Lobato.

In the excavations carried out were found ceramic remains of the time, such as a pendant that represents the goddess Venus. Among his paintings stand out those of animals, which, sometimes, appear superimposed on each other in different colors. The cavity, which is exploited today by the heirs of its discoverer, opens to the public every day.

It is necessary to reserve a ticket in advance to enter it. The price for adults is 10 euros, while children and students will only have to pay 6 euros. This cave contains cave paintings from the Solutrean era (20,000 years BC), an important Neolithic site (3,800 years BC) and several burials of the Chalcolithic (2,700 years BC).

It has been the only Malaga archaeological site that has been included in the European Cultural Route 'Roads of Rock Art'. There are plenty of reasons for this, since there you can see hands painted with the technique of airbrushing and signs made with the fingers, present only in a few sites around the world.

In order to access, you must reserve a ticket in advance. Keep in mind that it is an enclave that has limited visits per year, which allows it to remain as similar as possible to when it was inhabited. To find out about it, it is best to contact the Prehistory interpretation center in Guadalteba, located at the entrance of Ardales.

Del Pintor Suites & Hotels is located at number 27 of Calle Alamos, in the center of Malaga , in the "Picasso District", a few steps from the so-called monumental and artistic triangle of Malaga (Picasso Museum, monumental ensemble Teatro Romano-Alcazaba and the Museum of Malaga, in the spectacular Customs Palace). A privileged situation to know the center of Malaga on foot.

It is a boutique hotel with unique architecture located in the historic center of Malaga, and at a practically similar distance from the port and Playa de la Malagueta and the well-known Calle Larios.

If you are looking for a central hotel in Malaga , Hotel Del Pintor, the reference Boutique hotel in the center of Malaga will be your best ally.

In addition, you have the Suites del Pintor and Casas del Pintor, tourist apartments in the center of Malaga, find out at our reception or telephone.

If you come as a family, your best option is the Painter's Suites, some apartments with everything you need for family comfort in your getaway, totally new, and you will surely like them. Here you have a review to know them a little better.