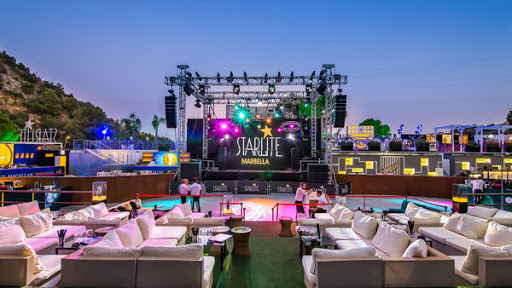 Cultura; Eventos; Festival; Málaga; Marbella; Turismo
The Starlite Festival has become a reference on the Costa del Sol , a display of glamor, music, gastronomy, fashion and fun in Marbella. At Hotel Del Pintor, suites and tourist apartments in Malaga, we tell you everything you need to know about the 2019 edition. Are you going to miss it?

Starlite is a musical festival held every summer in Marbella at the quarry of Nagüeles, an open-air rock amphitheater surrounded by greenery located in Marbella. It lasts almost two months, which makes it the longest festival in Europe. This 2019 edition has a daily program of concerts from July 5 to August 24.
Its activity mainly includes music, although in its programming there is also space for cinema, fashion, art and gastronomy. A whole set of activities that make Starlite a complete and exclusive festival for culture and leisure.
Artists of the likes of Enrique Iglesias, Elton John, Lenny Kravitz, Lionel Richie, Andrea Bocelli, Ricky Martin, Tom Jones, Pet Shop Boys, Alejandro Sanz, Eros Ramazzotti, Luis Fonsi, Plácido Domingo or Anastacia have gathered at Starlite Festival offering concerts for the memory.
In addition, every year Starlite Gala takes place, led by its hosts, Antonio Banderas and Sandra García-Sanjuán, has become the charity event par excellence, rewarding the solidarity of those who have made others their cause.

On July 5, Manuel Carrasco will give the first of his two concerts at Starlite Festival . In addition, the top stars of music in Spanish will be present, such as Pablo López, who will also do double, David Bisbal, Maluma or Don Omar. There will be no shortage of Anglo-Saxon legends like The Beach Boys or Sting for almost 50 unforgettable days.
Other participating artists are: Diana Krall, Eros Ramazzotti, Ben Harper & Innocent Criminals, Il Divo, Luis Fonsi, Juanes, Jamie Cullum, Jason Derulo, Oro Viejo by Dj Nano, Movida Night, Juan Magán, Roger Hodgson, Raphael, Nicky Jam , Melendi, Ketama, Stool, Sidecars, ABBA The Concert, Always like this, Manzanero and Mocedades, Kool & The Gang, José Mercé Pablo López and Tomatito, God Save The Queen, Jessie J, Don Patricio, Juan Peña & A Dos Velas, John Legend, James Rhodes and Katie Melua.
In addition, on Thursday July 18 you can relive the essence of the 80s and 90s of Spanish pop with the show Movida Night, in which Marta Sánchez will participate along with Coti, Nacho Campillo, Nacho García Vega, Pablo Carbonell and Javier Gurruchaga.

There will also be DJ sessions many nights from Monday to Sunday. But if you're interested in enjoying gastronomy or cultural events, I'll tell you what they're about.

Do you want to go to the most glamorous and exclusive festival in Spain? Del Pintor Suites & Hotels , is a boutique hotel in the center of Malaga . It is located at number 27 Calle Álamos, in the center of Málaga, in the "Barrio de Picasso", a few steps from the so-called monumental and artistic triangle of Málaga (Picasso Museum, monumental theater Teatro Romano-Alcazaba and the Museum of Málaga , in the spectacular Palacio De La Aduana). A privileged location to get to know the center of Málaga on foot.
It is a boutique hotel of singular architecture located in the historic center of Malaga, and at a practically similar distance from the port and beach of La Malagueta and from the well-known Calle Larios.
In addition, you have the Suites del Pintor and Casas del Pintor , tourist apartments in the center of Malaga , check in at our reception or phone.
Book Online at the best price 952 060 980 ☎