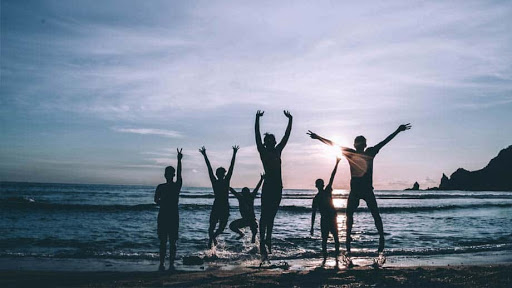 Cultura; Eventos; Málaga; Turismo
If there is a magical night for the people of Malaga, this is the eve of San Juan, on June 23. The Night of San Juan has been celebrated since time immemorial in all corners of the world, where thousands of people gather along the coast of Malaga.
Its origins are lost in time. But there is evidence that during this night, the celebration of the arrival of the summer solstice took place, the shortest night of the year.
In this magical night the littoral beaches are lit up with hundreds of bonfires and activities. They eat sardines, barbecue, drink and celebrate the arrival of summer. The party lasts until well into the morning.
Music, concerts, sardines , dances and people wanting to have fun. Large groups of friends and families gather and wait at 12 o'clock at night along the seashore, while they prepare the bonfires of San Juan . That's when the famous Júas are burned.
When the flames reach a reasonable height, young people from Malaga compete by doing pirouettes and jumping through the flames. Another tradition says that if you wash your face with the water of the sea at midnight, you will retain the eternal beauty. Be that as it may, the Night of San Juan has become a festivity with great roots among the inhabitants of Malaga .

Where to celebrate the night of San Juan in Malaga?

In Malaga city, the night of San Juan can be enjoyed on the beach of La Malagueta , there you can enjoy concerts and good atmosphere. The activity begins at 9:00 p.m. and lasts until dawn.
Another point on the coast of the capital where celebrating the night of San Juan are the beaches of Misericordia and San Andrés. There is also a good atmosphere where you can spend a fun night.

Del Pintor Suites & Hotels is located at number 27 Calle Álamos, in the center of Málaga, in the "Barrio de Picasso", a few steps from the so-called monumental and artistic triangle of Málaga (Picasso Museum, monumental theater Teatro Romano-Alcazaba and the Museum of Malaga, in the spectacular Palacio De La Aduana). A privileged location to get to know the center of Málaga on foot.
It is a boutique hotel of singular architecture located in the historic center of Malaga, and at a practically similar distance from the port and Playa de la Malagueta and from the well-known Calle Larios.
If you are looking for a central hotel in Malaga, the Hotel Del Pintor, the reference Boutique hotel in the center of Malaga will be your best ally.
In addition, you have the Suites del Pintor and Casas del Pintor, tourist apartments in the center of Malaga, check in at our reception or phone.
Book Online at the best price 952 060 980 ☎