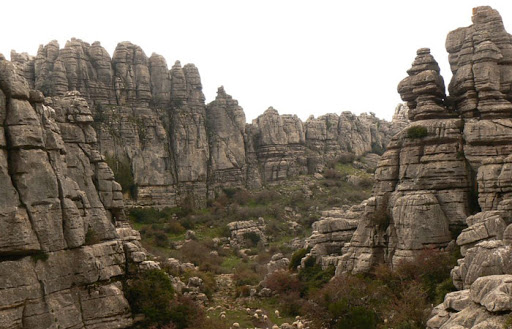 In the 80s, Romero San Juan sang about Andalusia something like: "God made the world in six days and on the seventh he rested and rested dreamed, that he lacked joy, and of the dream, he created Andalusia". Just enough to take a look to realize the charm that surrounds every corner of Andalusia.
In Malaga, the United Nations Educational, Scientific and Cultural Organization (UNESCO) has considered declaring these two places a World Heritage Site . Do not miss this tour of the UNESCO heritage enclaves of Malaga that will awaken your most exquisite taste for beauty.

El Torcal de Antequera is a beautiful natural area that is located between the municipalities of Antequera and Villanueva de la Concepción , which belong to the province of Málaga . Due to the incredible landscape created by millions of years of erosion on the rocks by various agents, on July 15, 2016 was declared a World Heritage Site by Unesco.
This natural space has a team of professional guides that will take us on a tour of the Torcal de Antequera land through a series of itineraries that vary depending on what we want to know. In this way we can make the Route of the Ammonites, the Heritage Route or the Kárstico Labyrinth among others.
This is formed by an erosion process that goes back some two hundred million years. At this stage, much of Europe and the Middle East were submerged in the Tethys Sea.As a result of the accumulation of skeletons, shells and shells of various marine animals, a process of sedimentation begins. The sediments have been accumulated in different levels creating horizontal strata of thousands of meters.

The Dolmens of Antequera Archaeological Ensemble is made up of the dolmens of Menga, Viera and El Romeral and is considered one of the best and best known exponents of European megalithism. In addition, guided tours can be hired from the website of the Junta de Andalucía.

Its exceptional value of this dolmen is given by its rare orientation with respect to the so-called Peña de los Enamorados. Menga is a sepulcher with the shape of a corridor and is constituted by an atrium and a burial chamber, in addition there is a deep well in the back of the chamber whose existence is not understood today.

The Viera Dolmen, also known as Cueva de los hermanos Viera, or Cueva Chica, its name comes from the fact that it was discovered in 1903 by the brothers José and Antonio Viera Fuentes. It is a megalithic sepulcher constituted by large vertical slabs called orthostats and other horizontal slabs or roof.

The Romeral is formed by a narrow corridor corridor of 4 m in length, built with large slabs of stones that flow into two circular chambers and although its official name is Tholos de El Romeral, it is also called El Romeral dolmen.
Walking tour through the Center of Malaga Our hotel is located in the center of Malaga, 200 meters from the Plaza de la Merced, and from which you can visit all the monuments of the historic center on foot, perfect for sightseeing. You can:
If you are looking for a central hotel in Malaga , the Hotel Del Pintor, the reference Boutique hotel in the center of Malaga will be your best ally. In addition, you have the Suites del Pintor and Casas del Pintor, tourist apartments in the center of Malaga, check in at our reception or phone.