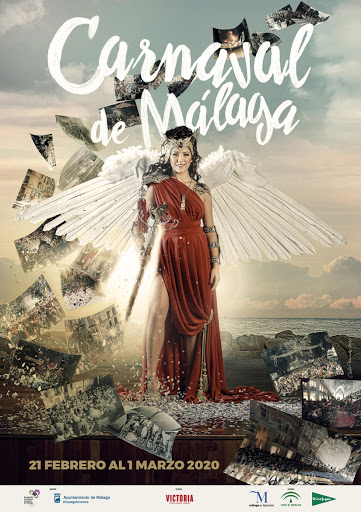 Turismo; Málaga; HotelMálaga
February has its own party and is none other than the popular festival of joy. The carnival in Malaga is lived in an intense way, developing a complete and varied program of activities that range from the contest of groups to gastronomic events in different neighborhoods of the capital.

The Malaga Carnival will be held from February 21 to March 1, this 2020 being its forty anniversary. But first we can enjoy numerous activities that will be held throughout the city.
The murgas, troupes and quartets go out and fill it with music and joy. We can also attend the Grand Parade, the Battle of Flowers or the Burial of the Boquerón, which will conclude this Malaga Carnival.
In addition, the Christmas lights of Calle Larios will be used and will remain on every day of the Malaga Carnival.

Origin of the Malaga Carnival

The origins of the Carnivals of Malaga date back to the beginning of the 16th century when the Cabildo of the Malaga Cathedral authorized, the day of St. Nicholas and the Day of the Holy Innocents, to represent a parody by one of the choir's children. He dressed in the bishop's clothes and during this celebration, the bishop directed the ceremonial of the Cathedral with the help of other children of the choir that formed the carnival court.
All of them parodied the religious ceremonies inside the Cathedral and accompanied her with dances and liturgical chants, in the presence of thousands of disguised malagueños and masks. But this party was suspended due to disorders during the procession and irreverence inside the Cathedral.
Two centuries later, in the XVIII, and until the middle of the XIX, the carnival celebrations in Malaga gained strength in the streets with masked balls inside the Main Theater.
Already in 1863 the carnival copla arises in Malaga, the main differentiation of the Andalusian carnival from other carnivals, as a fun and fun way for the popular expression of opinions and thoughts that still continues to evolve today.
The Carnival in Malaga continued intermittently until 1936, being suspended after the Spanish Civil War. In 1982 the carnival tradition was resumed in the city that continues until today.
The fun, grace and acidic lyrics of the troupes and murgas, liven up all the streets of Malaga during the Carnival, colored in costumes, laughs and joy, a party that increasingly has more followers and is lived with greater intensity by the people .
The culmination of the Malaga Carnival is the burial of the anchovy, where plañideras, singing groups and numerous people in disguise form a party to accompany the funeral procession through the city streets to Malagueta Beach, where a large bonfire is made. Here the festivities of this year end with the dismay and grief of all the carnivals and with desire to arrive next year.
Enjoy the Carnival of Malaga , from January 29 to March 1 from Hotel del Pintor , one of the best hotels in Malaga according to Tripadvisor. In addition, you have the Painter's Suites and the Painter's Houses , tourist apartments in the center of Malaga , find out at our reception or telephone.
We are in the center of Malaga , a strategic place for you to go on foot to all events and take a walk through the city. Located one minute from the Cervantes Theater and 5 minutes from the center of Malaga, Calle Larios, Cathedral, museums etc.

Do you need more info? Ask at our reception or by phone 952 060 980, we will be happy to guide you and provide you with the information you need.