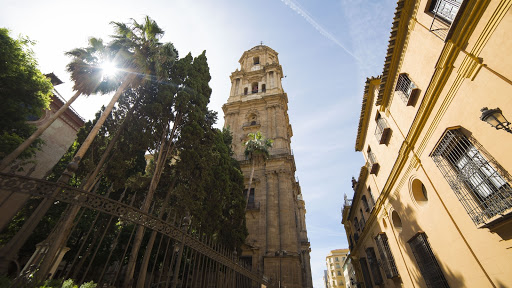 Turismo; Málaga; HotelMálaga
The province of Malaga has a privileged location to know the rest of Andalusian destinations. It is the starting point for day trips to the monumental cities of Córdoba and Granada or the Sierra de Grazalema.
From the Hotel del Pintor , in the center of Malaga , we suggest 6 express getaways within two hours by car .

This protected space hides more spectacular enclaves, such as the vertiginous Green Gorge, the peak of El Torreón, a challenge for hikers, or the Plains of the Republican. To this we must add charming villages where there are many options for rural accommodation, such as Zahara de la Sierra, Grazalema itself, which gives its name to the natural park, El Bosque or Benamahoma.

A valuable Renaissance and Baroque legacy, one of the most unique streets in Europe or even lagoons where you can see pink flamenco are some of the attractions that await in the Sevillian town of Osuna. This monumental town treasures a valuable historical and artistic legacy thanks to its ducal past.
It is no coincidence that the famous series 'Game of Thrones' was set in its locations for the filming of very important scenes in this saga of fiction, such as that recorded in its centennial bullring. All this just an hour and a half from the city of Malaga and one hour from Antequera.

Especially known but its wide historical legacy and located next to the Guadalquivir, it has some of the architectural jewels of the old Al-Ándalus, such as its Mosque-Cathedral, around which its historical center revolves, which, in turn is protected as World Heritage.
The Alcazar de los Reyes Cristianos, the Synagogue, the Julio Romero de Torres Museum, the Roman Bridge or its most emblematic squares - La Tendilla and the Corredera - are some of the must-sees in the surroundings of the mentioned temple.

In just over an hour and a half, you can reach the port of this coastal town of Almeria to taste its famous seafood, among other options.

Little presentation needs this Andalusian monumental city, located an hour and a half from the capital of Malaga.
In addition to having a unique Andalusian monument in the world, the Alhambra, in its urban area you can visit neighborhoods that give off a special magic, such as the Albaicín or the Sacromonte, which never takes your eyes off the dilated Andalusian past of the city.
The Cathedral of Granada, next to which lie the mortal remains of the Catholic Monarchs, the Generalife or the monastery of San Jerónimo are other excuses to spend more time in this city that enchants through the five senses.

In less than two hours it is also possible to reach the Jienense region of the Sierra Sur, where monumental villages such as Alcaudete or Alcalá la Real await. There you can enjoy visits to spectacular castles that were fundamental in the past and that today are excellent viewpoints of this eminently agricultural region. To all this we must add a rich gastronomy and natural enclaves like some lagoons of ornithological interest.

Hotel Del Pinto r is strategically located to discover Andalusia in its entirety . If you come with family or friends, your best option is the Painter's Suites, apartments with everything you need for family comfort in your getaway, totally new, and they will surely be to your liking. Here you have a review to know them a little better.

Do you want to meet us?